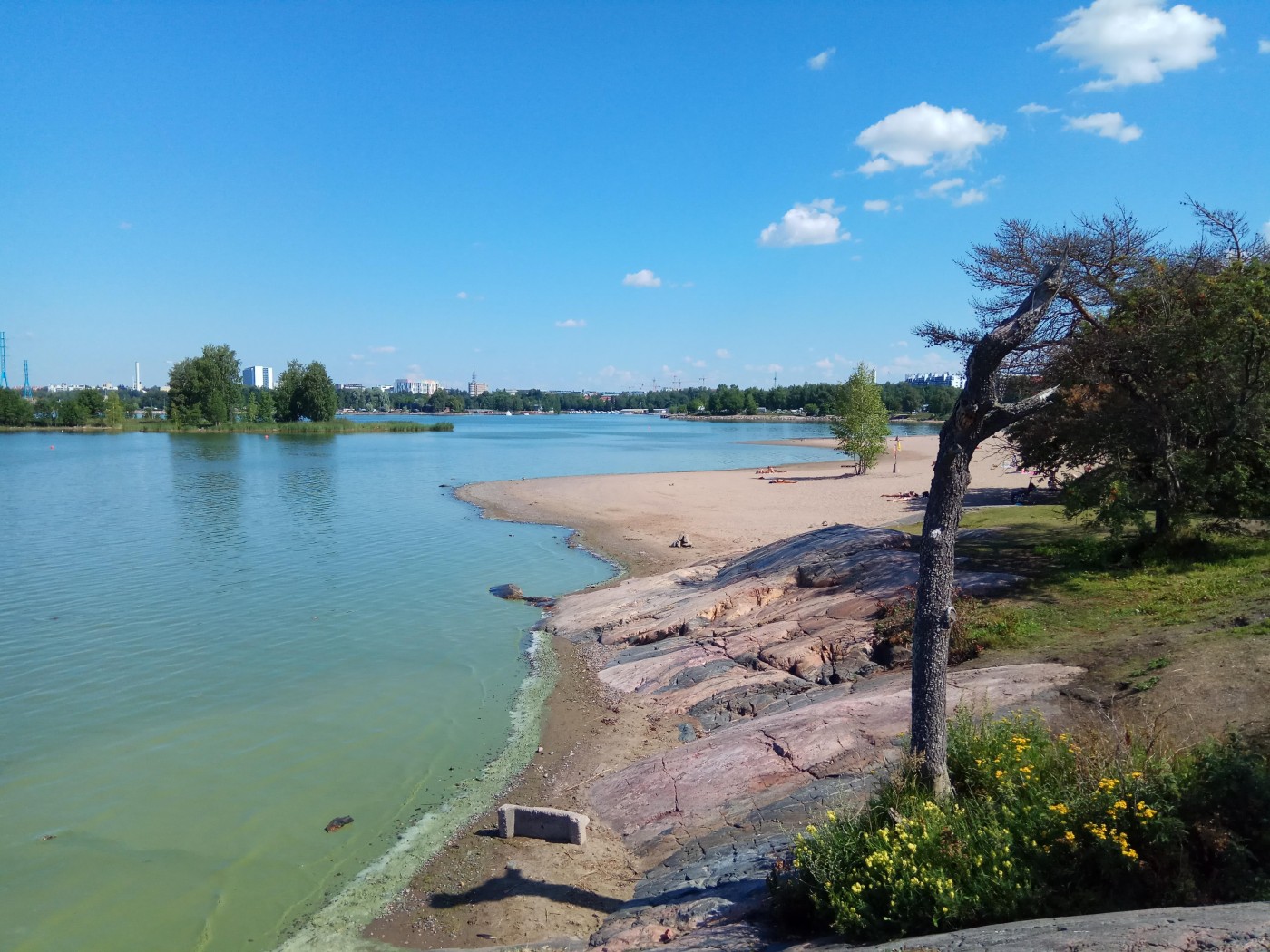 I’m glad that I got to spend a few days in Helsinki on this trip but it was just so incredibly expensive.

I caught the 6:30pm Eckeroline ferry from Tallinn to Helsinki. The fare is usually between €19-24 and it’s really straightforward to buy them online. The only drama I had was finding the right terminal, so I walked around for ages. It’s Terminal A, head to there!

There’s a left luggage facility there that costs €4 for a big bag so it’s easy to drop your stuff and then head back over to a cool nearby hipster area for a coffee or an explore.

The ferry ride was cool, I headed straight for the bar and got a good seat looking out over the bow. Unbeknownst to me there’s a live performance on each crossing so I got to enjoy almost two hours of excellent cover music and. I grabbed a drink from the bar and discovered a Finnish favourite. Lonkerot (Long Drink) is really refreshing – gin with grapefruit and served ice cold on tap. The ferry price was €5 for 0.4l, which seemed alright.

I FOOLISHLY paid for a taxi to the hostel. Fool. MAPS.ME and Google Maps were both showing that it was quite a long walk to get on the tram and then quite far to walk when I got to the other side. I don’t know why it showed this as Tram 7 stops practically at the entrance and would have taken me all the way to the hostel with only a few minutes walk. I paid €24.60 for the taxi.

I stayed at CheapSleep Hostel, it certainly wasn’t cheap but it was definitely more affordable than all the other options I found. It was just over €27 per night in a 10-bed dorm which includes a buffet breakfast.

If brunch was a competition, then I would win at brunch today. I followed advice in the lonely planet and went across town for Sunday Brunch at Café Ursula. The location is beautiful with a newly opened terrace out on the waterfront at the edge of Kaivopuisto Park.

I walked there through a park, then a graveyard and then along the waterfront. I haven’t seen anything like the graveyard – I walked in and immediately saw a red squirrel and a hedgehog.

For €24 you get an all-you-can-eat (they don’t call it that…) brunch including tea, coffee and juice. But the food! The food is great and varied too so you can get everything from pastries and granola through to deli salads and cake! I avoided the former and went mad for the latter. 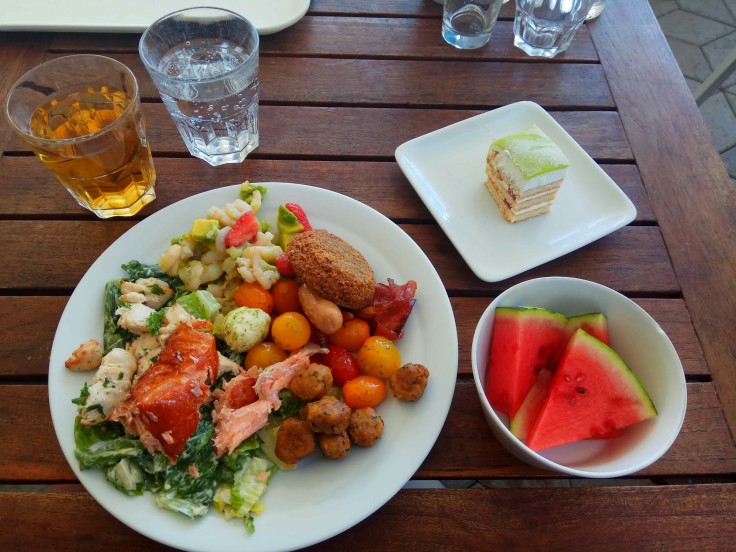 For my first paid-for meal in Helsinki it certainly hit the spot. Brunch is served from 10-3 on Sunday so you can definitely take your time, enjoy your food and soak up the atmosphere.

I walked along the waterfront some more and it’s just such a nice atmosphere with people enjoying the beautiful weather. 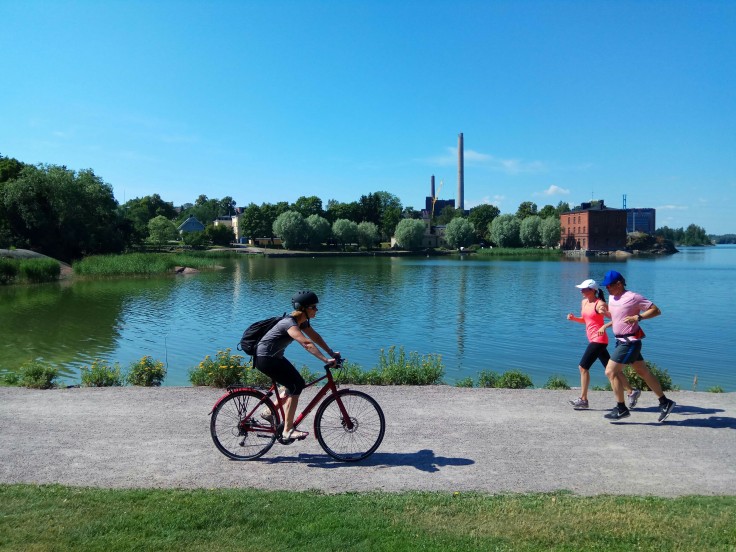 I chilled out at the beach for a while, genuinely surprised at how nice it was in the middle of the city.

The public transport is super easy once you get started so I jumped on a tram back to the city centre so that I could see some more sights. I went to the Rock Church and that was impressive and strange.

Today is a strange day for Helsinki. Trump and Putin are meeting in the Presidential Palace so there are large protests but also a large area of the city centre is closed to the public.

I was up and about at a reasonable time and hopped onto tram 7 to take me to the ferry port for Suommenlinna Island to spend the day walking around and then I intended to hit a sauna afterward. But it wasn’t to be: my tram took a large diversion and before I knew it, I was the other side of the city centre from where I was expecting to go. So I jumped off and then decided to walk. Google took me down The Esplanade, a place I was looking forward to walking through and suddenly I started noticing more and more police. I googled where the Presidential Palace (location of the Helsinki Summit) was right on my route to the ferry and the whole place was locked down with barriers, police and military.

It was a couple of hours until the summit was due to start but I decided to hang around at the main protest site. The Fins did a pretty good job with their protest signs but it wasn’t a patch on the British protest at the weekend for Trump’s visit. The Brits really do know how to protest.

There were three cavalcades for the Finnish, Russian and then the American presidents and a very vocal Fin giving Putin what for. The protest got better throughout the afternoon and I stuck around because my plan for the day wasn’t going to work – the ferry leaves from within the blockade so it has been cancelled for the day.

I hung out listening to a group play some music as part of their protest.

Then I went to visit the Helsinki Cathedral which was a haven from the heat and noise and wound up my afternoon at a lovely cafe near the attractive hilltop Uspenski Cathedral. I enjoyed a €22 halloumi salad and a €7 glass of rose wine (#ouch!) for a late lunch.

I was hankering after bubble tea and a quick Google search showed there was a place the other side of the city, in an area I wouldn’t otherwise visit. It was in a shopping centre right next to a metro stop. Sorted. As with everything in Helsinki, it wasn’t cheap (€4.50), but it was a hot day and it was worth it! I had a peach green tea with kiwi and green apple bubbles and it was one of the best bubble teas I’ve ever had. 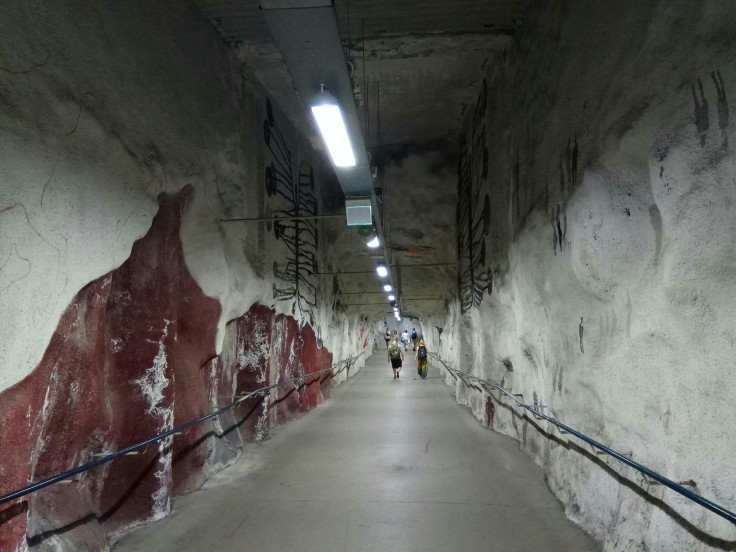 I got the metro back into the centre and I finally spotted a rooftop bar to watch the sunset from! The Ravintola Loiste Terrace has a nice view and the rooves looked lovely in the sunset. Strange thing though, the place shuts at 10pm while it’s still light. 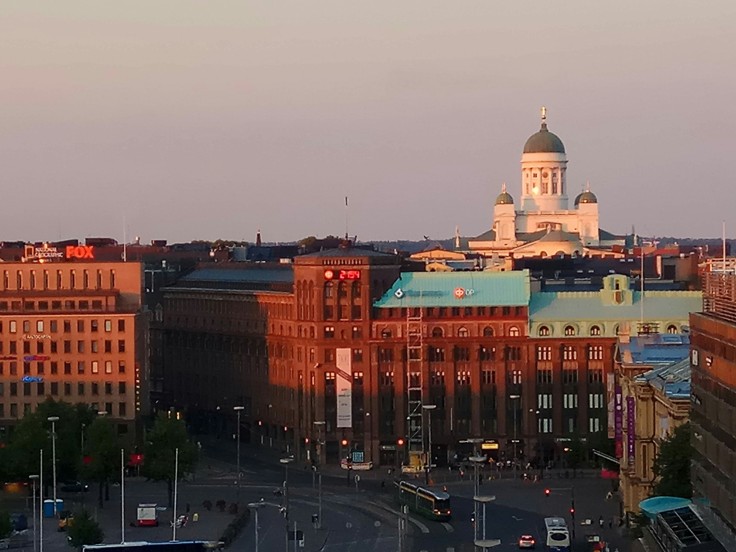 Now we’re back in business! I caught the tram to a small port in the city and stumbled across a great handicraft and food market!

I mooched around and then hopped onto the wrong ferry, spotting my error just in time and getting onto the correct one!

The ride over there is 10 minutes and it’s included in a Helsinki Travel (€9 for 24 hours, €18 for 72 hours). There are some nice cafés on the island and I recommend taking a picnic and going for a stroll. It’s really pretty and there are trails everywhere.

I found a pitch black tunnel under the battlements of an old fort and decided to go for an explore. I wished I had my head torch with me as this phone torch was not up to the job!! But I made it out the other side after 100m or so and found that there was actually a path over the grassy hill to get to the same field. Less fun though!

I ate my lunch and got pretty sunburned while I relaxed and read a book. Then I did some more strolling around and caught a ferry back to the city in the afternoon for a traditional Finnish sauna.

I paid €15 at a local sauna and went upstairs to the ladies’ section where I got undressed, found the shower and then took my little disposable film-coated paper sheet into the sauna! For most of the time it was just me and a friendly Finnish gypsy woman in there. I stayed for ages to make absolutely sure I made the most of it. Then I wandered back to the hostel picking up a reasonably priced Chinese takeaway on the way. Then I got Tram 7 to the ferry terminal (easy!).

Helsinki – tick. Bit too expensive for me and it genuinely didn’t seem as charming as Tallinn. But I’m still glad I went.

2 thoughts on “A few days in Helsinki”