My trip to Moalboal went by in a flash and I seemed to spend most of it underwater.

I didn’t have any reservations but I headed to MoHo – Moalboal Hostel which was very highly rated! They had a bed available in a really nice dorm for one night so I booked. The common area is nicely decorated and has a really impressive Christmas tree! I overheard some people talking about a dive shop (called Savedra) they are using tomorrow and they’ve just said I should go along with them in the morning (as it’s too late to book tonight). All that’s left to do tonight is have dinner.

As I was walking towards the beach I found a cute looking restaurant in a courtyard quite close to the hostel. It’s called Three Bears and it’s adorable. 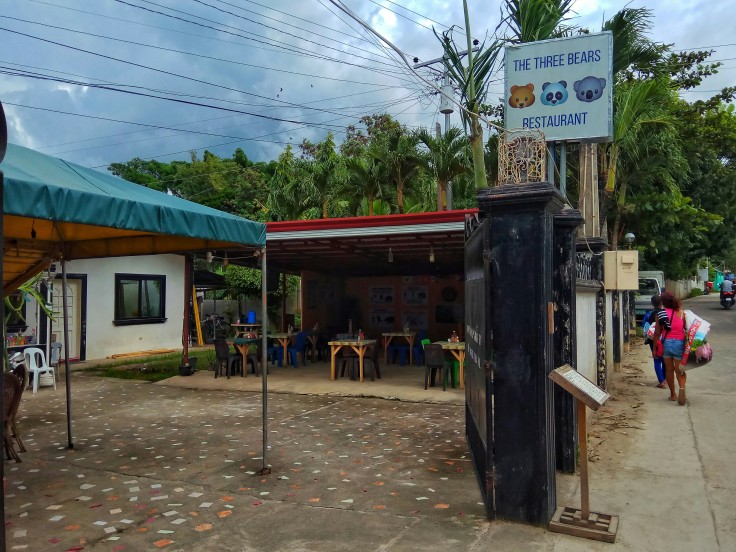 The menu is really good and I ordered chicken with mushrooms and rice, which was excellent.

I had a good night’s sleep and got up at 6am with a few other people to go to the dive shop for 7am.

The main attraction for diving in Moalboal is the “sardine run”; a shoal of millions of sardines that go on in an unending river. There is a famous sardine run in South Africa too, which I’ve not seen. The one at Moalboal can be seen by either snorkeling or diving (scuba or apnoea) and it can be seen from the shore!

I arranged a package of three dives. Our first dive was at Pescador Island, which is a 20 minute boat ride from the shore. The sealife there is really nice and I saw lots of small critters and juvenile fish plus a really cool little frogfish but he was hiding behind a leaf. It was a very nice wall dive although it was a bit too crowded with divers for my liking. I’d definitely go again though.

I got back from the dive and had breakfast at a “French bakery” near the dive shop. It was strange, with everything tasting overly sweet but it was sustenance nonetheless.

The second morning dive was at The Airport – a muck dive with a sunken light aircraft which I climbed into for a photo.

There wasn’t much else to see on the dive really because we went straight for the plane but I there are some bold goatfish snuffling through the muck. 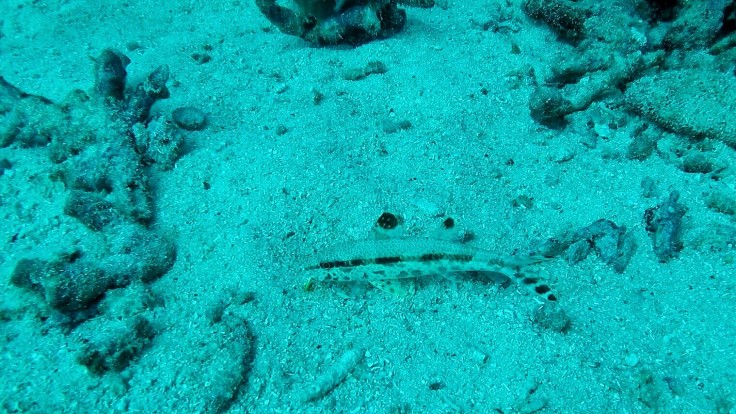 The best thing I saw by miles was this awesome giant frogfish perched in this coral tube. He practically has a human face and hands – so cool! I hung out with him for ages after the group of divers left him alone. The visibility was really good so I wasn’t worried about being left behind. And this little guy rocked.

My third dive of the day was at Ludo, to see the salmon run. It’s a drift dive, so we were dropped off along the shore from the dive shop and we drifted along a steep wall that went down to at least 40 metres. Our dive ended at the shore near the dive shop.

We saw the incredible sight of the sardine run and there were streams of them flowing all around us. With different groups shimmering in the light depending on the angle they swam at.

There was a cool ghost pipefish floating along looking a bit like a piece of spiny coral too.

This is a shore dive so we could hear boats coming and going, which isn’t exactly pleasant but it wasn’t too bad, and as we reached the exit point for the dive we had to be careful not to hit our heads on the boats!

I had to move hostel but I managed to stay at the same one as Mark, a Dutch guy that I have seen on two other Philippines dive trips so far. I went out with some people from my new and old hostel and we ended up having a really big night out so I didn’t do anything except relax and eat until my trip back to Cebu ready for the next adventure… Donsol, to dive with the whale sharks!!!